You are here: Home / Archives for at&t center

The concert was a few weeks ago but – hands down these guys put on such an awesome show!!! 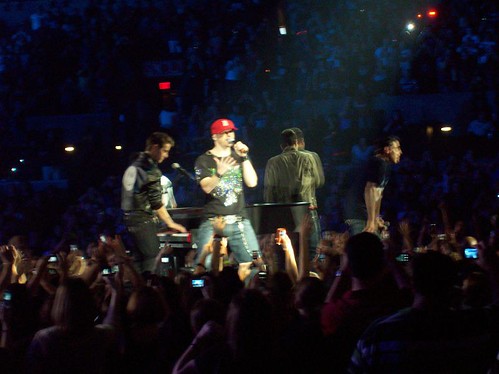 Let’s see – so I had tickets to the Houston concert which was on a Thursday – but no one to watch my son. A friend said she would, then it turned out there was a wives dinner that night as well, and I felt bad leaving Jake with just whoever I could. After not having anyone to watch him, and Chris working late that night, I didn’t go to the concert. I did go to the dinner, which was fun so at least that.

Friday Alice and I left for the San Antonio concert early’ish – I figured we would grab something to eat in San Antonio, plus I wasn’t sure how traffic would be heading that way. Except the car decided to take that moment and have a heart attack – the engine light started blinking right when we left town and after pulling over to read that this is a bad thing, turn around and go home. Jake was with a friend and Chris was to be off work about an hour from then. So Alice and I get Jake and come home, waiting for Chris so we can get out of town!

Chris gets home and we leave – from hearing about other concerts I figured they would be on stage about 8:30. The AT&T Center was really easy to find, thank goodness, and we got there about 8:40. I said okay we just missed maybe one song and them coming on stage. But I was wrong!

Natasha Bedingfield opened for them and she was still on when we got there. We found our seats, listened to the song she was doing and then walked out to get tshirts. I got one for each of us and also a charm bracelet – I know, I know. But hey, I never got to see them in concert back in the day so I treated myself.

After we sat back down, they came onstage in about a minute – perfect timing! They were so awesome! We had great seats, second row up from the floor and Alice stood on her seat which made her as tall as me. Toward the end they moved to a circular stage at the back of the floor – so directly in front of us. It spun around and had a piano on it, they did two or three songs from there and then when they ran back to the stage they ran right in front of us. When I realized they were coming our way, I grabbed Alice and put her in front of us to put her hand out, but I didn’t tell her what I was doing so she didn’t put her hand out, she was just confused. LOL Jon was the last to run by though.

When I got home I told Chris, I don’t have any regrets in life (and I don’t, I wouldn’t be who I am today without doing or seeing or saying or whatever everything I’ve done) – but I regret not going to NKOTB in Houston.  LOL 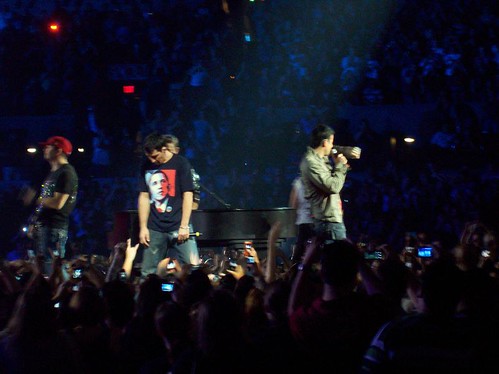 So great, loved it, awesome show! My camera is not good at all and I only tried taking a dozen pictures or so. The ones in the post are the only two that came out decent, and even they aren’t that great! I did get a video though so I’m happy about that. 🙂

This just means I need to buy a new camera.