You are here: Home / Archives for halloween costumes 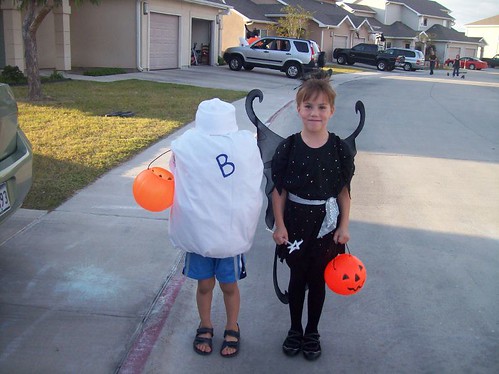 jake the Boiled Egg and Alice the Fairy!

It was Jake’s idea to be an egg and he did go back and forth as to if he was going to be boiled or a hard egg. I figured making a hard egg would be easy, but as it turned out making a boiled egg was pretty easy too. I used chicken wire, batting, a white pillow case and a white dress shirt of Chris. The B is drawn on with a fabric marker. He also has on a white stocking hat and at various times would duck down so you couldn’t see him but just see the egg. 🙂

Alice’s fairy outfit is a black shirt of Chris’ cut up (cut on the arms and bottom like tinkerbell) with glitter on it, black tights, belt from a pair of jeans she bought, fairy wings from a neighbor (which I found on clearance the other day so now Alice has her own pair!). Oh and a wand and a feather barrette. I found the wings again on clearance so bought her a pair since the Halloween night ones were loaned to us.

That night Jake said he wants to be an egg again next year, so we’ll see how he feels when the time comes around. I think it would be fun to do a family costume! I’m not sure Chris would dress up, but I do have a year to talk him into it.