You are here: Home / Archives for saturn

Have you heard of HouseParty.com? I heard about it a couple of months ago from a friend, Petite Mommy on twitter. I think she was asking if anyone had hosted a party for them before. I signed up then and browsed the parties, there weren’t many to pick from but I signed up to host a Saturn house party when it became available. The plan is to watch the new show Real Simple Real Life, play a few games and give out a few prizes.

Then a couple of days ago I got a call from Saturn asking if I wanted a car to drive for a few days. Would I! Yes please! This afternoon Chris took the kids and I to pick up the car.

Can you see the kids in the back?

We got a Saturn Vue from Saturn of Corpus Christi. It is a 2008 with low mileage and is a really great ride. It has a moon (sun? what is the difference?) roof, seats that fold flat, OnStar, and a bunch of great tweaks like if you are in the backseat you can push a button and the cup holders magically appear (it’s magic to a five year old anyway), airbags all the way around (six total), xm radio, awesome cooling system and more.

Considering my car has been acting like a toddler that needs a nap, driving this car is so awesome! We have the car until Saturday and have already shown a few neighbors! Everyone coming to the party this weekend will also see it and of course whoever else we run into over the next few days. 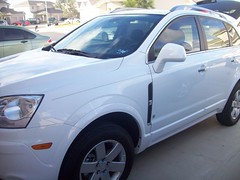 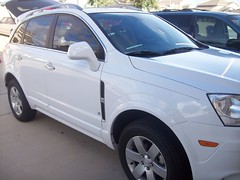 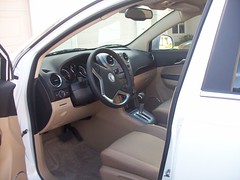 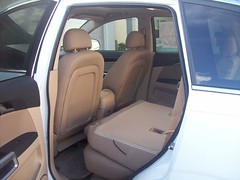 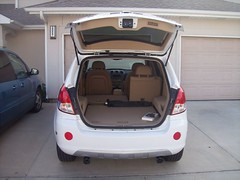