Halloween was fairly uneventful for us. Alice and Jake didn’t get that it was Halloween until I told them late in the afternoon. I should have waited – from the moment I said something they asked every three minutes if it was time to leave yet. It was hard to distract them after that and I know they put their costumes on and took them off at least three times before it was really time for us to go. Alice was upset because the purple hair spray did nothing to her hair! And I sprayed the entire can on her too. 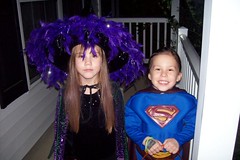 We left before it was totally dark outside, a handful of our neighbors were also out. I love passing out candy and seeing the costumes but there just weren’t a lot of people around. It was odd because last year it seemed that at every house people were home and the same amount was out and about. And we ran out of candy but this year even after we came inside and left the candy on a chair, we still had probably two bags left. Chris took it to work the next day and gave it to his students. The kids still ended up with a lot ~ 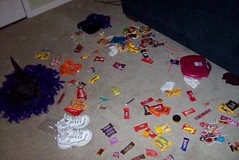 I don’t think you can tell but they were in the middle of separating all the candy. Of course once that was done, they just put it all back into their bags! They had a great time and were sad that we had to stop when we did. I really wonder where the rest of my neighborhood was?

Did your kids have fun on Halloween? Did you post pictures? Share the link so we can all see!