My Mom sent us a sock puppet kit for Christmas last year and we made one and then never got around to making the other. It wasn’t too hard to figure out though I remember it taking a little while. So here is Fluffy! You can’t see but he also has a belly button because, duh, everyone has a belly button! He has mismatched eyes too but they are the same size, which I guess was more important to Alice then them matching colors! You were supposed to cut a tie and put that coming out of the top of his head but the only ties we have are ones that Chris just bought and there was no way we were cutting them up – so it is a ribbon. The ribbon kind of hangs in Fluffy’s face, but he doesn’t mind. It distracts from him not smiling I think.

Most of the time Alice or Jake sleeps with him, or he has a special place on Alice’s bookcase. Now there is a gift that she still loves too, Fluffy. She wants to make more but we just haven’t. Maybe we’ll do that this weekend, Fluffy does need a friend. 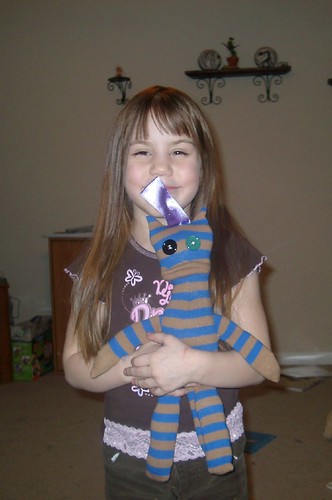