Ah I thought my days of sewing Chris’ uniforms were long gone. Or at least the vacation from them would be longer then the eight or so months it has lasted. But he called earlier and said the uniforms we casually talked about, and he wouldn’t need for a few more days, he really needs and can I sew them really soon – like after we hung up. 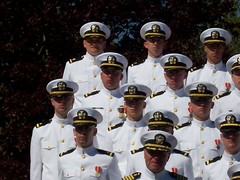 So after a bit of searching to make sure I put the patches on right, I realize he bought the wrong patches! I’d laugh if I knew he wasn’t going to be stressed about it. Okay I did laugh, but he wasn’t here to hear me! I sewed on three of the five and can’t use the other two because they aren’t for his uniform. And we don’t have any that will work. And the store to buy them closed about an hour ago and isn’t open until tomorrow morning.

The patches need to be in a specific spot, sewn on in a specific way. Usually everything is centered (usually because maybe there is one out there that isn’t) above a pocket and sewn with the same color thread as the uniform. I’ve never bought patches anywhere other then the Exchange and for the ones with his name on it, they have a very fast turn around time. There are usually places on base that will sew the patches on for you, for a small fee, and depending on how big the base is you are at this can take anywhere from a day to a week or two or longer. Since it doesn’t take too long I’ve usually sewn Chris’ on every time he needs it done – except when he was at school this spring, then he paid to have it done.

I’m not sure what we’ll do now. Maybe I’ll get to the store first thing when it opens tomorrow then ask if they will do a rush service and sew the patches on for me while I wait. I’ve never done that and I know most are so busy they wouldn’t offer that service.

Oh and for those who are searching how to sew on navy uniform patches, click that link. I had a heck of a time finding a site that would tell me about it until I finally went to wikipedia. I don’t usually rely on wiki for stuff like that so it was surprising to find exactly what I was looking for in moments!