You are here: Home / Archives for Ramblings

Not 99 bottles of beer though. Just 99 things. Things that my friend Holly posted about – she’s done 45 off of this list!

1. Started your own blog
2. Slept under the stars
3. Played in a band
4. Visited Hawaii
5. Watched a meteor shower
6. Given more than you can afford to charity
7. Been to Disneyland

Disneyland, April 2009. Wow my kiddos are tiny! And since this picture, I’ve lost about 35 pounds.

Porthole on cruise. My friend Holly and I went on the Kenny Chesney cruise in 2006.

33. Seen Niagara Falls in person
34. Visited the birthplace of your ancestors

Backyard view at my Uncle’s house. I’m lucky to have been raised in the place of my ancestors. January 2008.

35. Seen an Amish community
36. Taught yourself a new language
37. Had enough money to be truly satisfied
38. Seen the Leaning Tower of Pisa in person
39. Gone rock climbing
40. Seen Michelangelo’s David
41. Sung karaoke
42. Seen Old Faithful geyser erupt
43. Bought a stranger a meal at a restaurant
44. Visited Africa
45. Walked on a beach by moonlight
46. Been transported in an ambulance
47. Had your portrait painted
48. Gone deep sea fishing
49. Seen the Sistine Chapel in person
50. Been to the top of the Eiffel Tower in Paris
51. Gone scuba diving or snorkeling
52. Kissed in the rain
53. Played in the mud
54. Gone to a drive-in theater
55. Been in a movie
56. Visited the Great Wall of China
57. Started a business
58. Taken a martial arts class
59. Visited Russia
60. Served at a soup kitchen
61. Sold Girl Scout Cookies
62. Gone whale watching
63. Got flowers for no reason
64. Donated blood, platelets or plasma
65. Gone sky diving
66. Visited a Nazi Concentration Camp
67. Bounced a check
68. Flown in a helicopter
69. Saved a favorite childhood toy
70. Visited the Lincoln Memorial
71. Eaten Caviar
72. Pieced a quilt

Hhmm, I don’t have any quilt pictures on my phone. Here is half of a paper pieced star. I haven’t had any lessons in paper piecing, just jumped in and am trying to figure it out. And man, it is tough! There are two mistakes in this half, which doesn’t sound like a lot, but it feels like it is.

Well Holly has me beat! I’ve only done 43 of those things. How about I add a few more:

I, like many others, was ready at 8 AM (my time) earlier this week when the tickets went on sale. I didn’t realize that last year tickets were being sold up until the conference started, I just wanted to buy my ticket and get a small discount (I lucked out and was one of the first fifty to register!). I have a room reserved and will probably get a roommate.

I promise I’ve been sewing up a storm lately! I haven’t had time to blog about any of it, but I finally uploaded pictures to flickr so here they are. 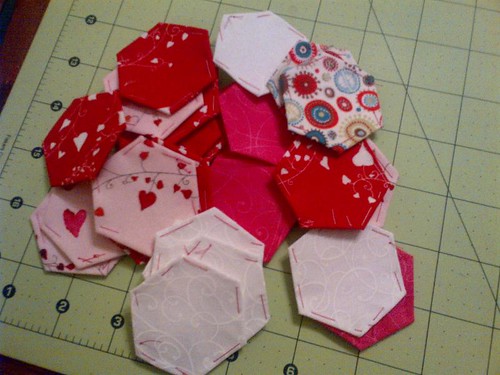 The first hexies I made. I just went for it one day and whipped up a bunch of them in a couple of days. I am making a window covering for a friend of my Mom’s, I’m almost done with that so pictures soon! 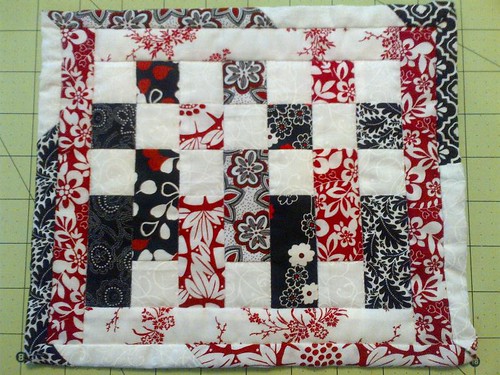 Here is one of the first mug rugs I ever made! I made a Turning Twenty quilt with these fabrics and had enough left over to make a mug rug. It is a little busy, but I still love it. 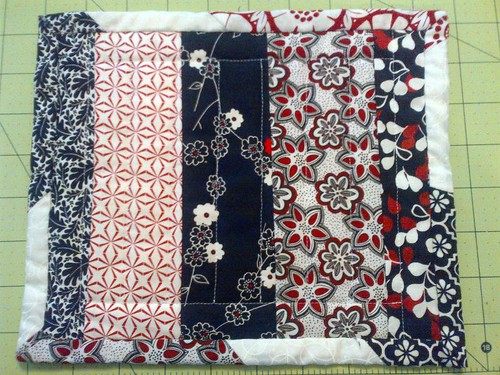 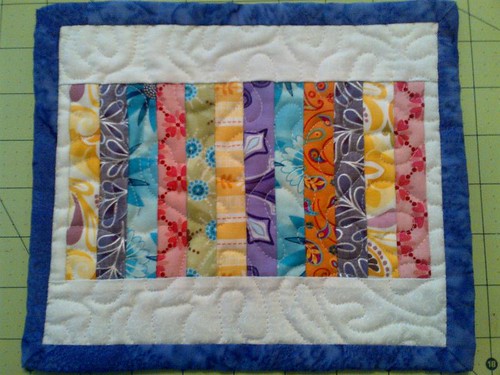 And the other of the first mug rugs I’ve ever made – I’ve made two so far. I love this strips of color one. 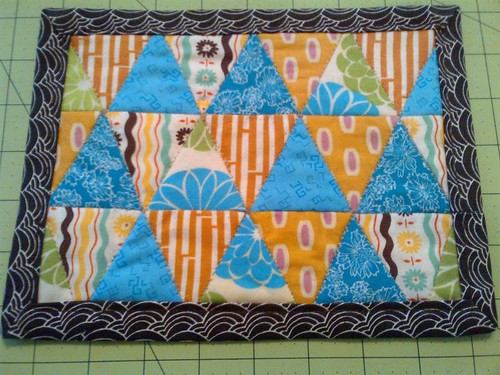 And certainly not least, the mug rug I received from Sister Diane in the Craft Social mug rug swap! I love this and use it when I am sewing.

My friend Andrea teamed up with a friend of hers (Hi Cole) and they created 3 on Thursday. This is a replacement for Two on Tuesday. This week the first question is:

With the recent MegaMillions hoopla, there’s been a lot of dreaming about what we’d do with all that money. What are three things on your “if I won the lottery” list?

1. First thing, I’d pay off all our debt, pay off our houses (though let’s all cross our fingers that the house in SC sells quickly!), pay off the debt for my brothers and parents and make sure everyone has a house. Let’s face it, even if someone had extravagant taste, that is WAY less then a couple million dollars.

2. Set up college funds for all my nieces/nephews (the newest nephew was just born ten days ago! Baby Buzz, or maybe I’ll call him Buzzer? Not his name though LOL makes grandchild number fourteen for our parents), and set aside enough for future generations. And really, that wouldn’t be that much – in the grand scheme of the mega millions.

The mega millions is such a HUGE amount, I can’t even imagine spending it. I can imaging paying off debt and buying houses, but what was the final number, $640 million? That’s crazy!

Congratulations to Deb of Lift Bridge Cards and Crafts, she is the winner of the contest I held this week for a spot in the Busting the Blog Myth class that Sister Diane and Tara Swiger are hosting!

What a wonderful idea – I’m an educator, too, and have seen first hand the ripple effect of helping one student learn and grow.

I’ve taken Diane’s “Tune-up” class for blogs, and have become so much more confident and competent in my blog writing. I’m looking to take my crafty enterprises to the next level, and think that this class will really help propel me into the future. I have some great ideas, and need to get a little more education and support to make them a reality.

Busting the Blog Myth starts in just a few days so head on over to sign up now.

My day job outside of the home is in the Development Office at Northwest Indian College. The development office’s focus is on fundraising for scholarships and endowments for the students. We organize a couple of large events each years and also do other “typical” fundraising such as direct mail. We are currently planning our 4th Annual TL’aneq – Gathering for a Celebration event if you would like to attend!

I’ve been thinking about the impact that supporting people has on others. The American Indian College Fund recently started a new campaign titled Help a Student, Help a Tribe:

The impact that one student can have is tremendous. The student from NWIC who is profiled as part of the AICF campaign can help stop 1,800 kids from being dropouts. That is a huge number! The difference one person can make can be measured and success can be the outcome.

This has definitely spilled over from my job into my online craft community support. I have also been supporting free (here is my inspiration for doing so – Sister Diane’s January update) and I’ve been thinking about how to take it a step farther. I love being able to buy an awesome Craft Sanity magazine (link is to the print copy) and know that doing this helps Jennifer continue to be able to put these magazines together. She isn’t a huge business, with financial backing, she is someone who has knowledge to share (in the form of writing and collecting stories, as well as photography, tutorial writing, layout, etc.). Supporting Jennifer allows her to reach more people

One thing I would like to do for February is to gift Sister Diane and Tara Swiger’s “Busting the Blog Myth” class to someone. Leave a comment on this post to be considered – tell me how taking this class would impact your business and online work. 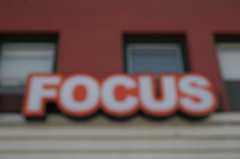 From Sister Diane’s post: “Busting the Blog Myth: How to make a blog that actually markets your business (without being gross). It’s a four-day intensive, starting on February 20, that aims to help each participant dig deep into how blogging can best work for their businesses.”

The contest will run from today, Monday February 13, through Thursday, February 16. The winner will be picked using random.org and I will notify them (and post here) Friday morning.