You are here: Home / Archives for Family

Whew, what a year this has been.

Yesterday marked the end of my last semester for my undergraduate degree. *big deep breath out* I actually turned in my last final on Friday and I felt so emotional! It has taken me a long time to get this degree and I am just thrilled. I didn’t think I would be as emotional as I was, I cried moments after turning the paper in. My official graduation date is at the end of August, finally.

I finished the baby quilt I posted previously! This is a pattern from the Little Bits Quilting Bee book and is so easy. I pieced the back using leftover fabric, including the triangles that, if I followed the pattern, would have made a border. I quilted echo lines around the chevrons. The quilting is my favorite part about this one, the baby’s room’s decor is grey and white and chevrons. I thought oh I’m just going to quilt lines echoing the design – instant chevrons! 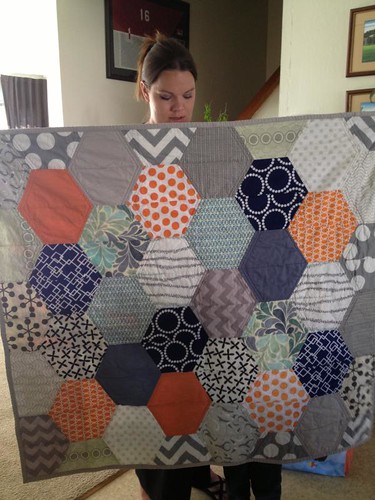 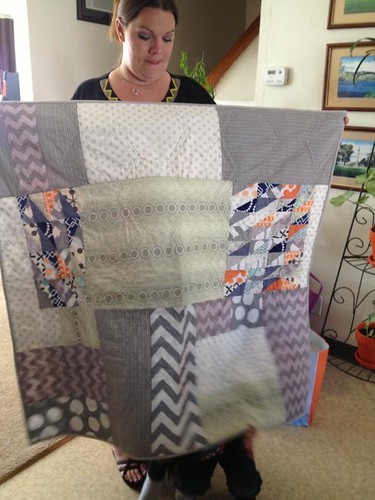 Forgive the blurry pic, my son jumped behind the quilt and moved it while I was taking a picture.

We have had many people visit us so we are frequent aquarium visitors. The kids favorite thing to do is pretend to be a sea anemone. 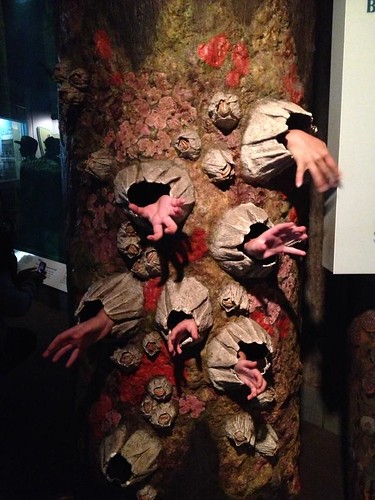 And I love turtles so here is a baby. 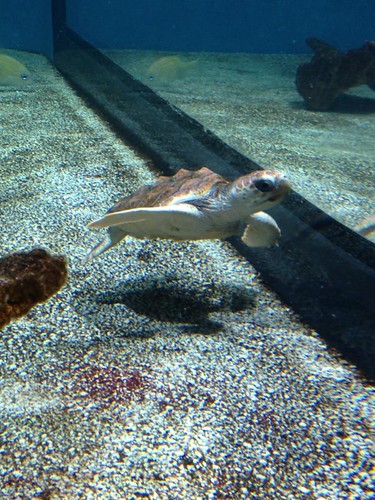 I recently got a bike and we have been trying to ride daily, or at least several times a week. Riding a bike is a calorie burner! I love it. My husband is thinking he may be able to commute by bike at his next job, so we are researching extras like bags and a different stroller to pull the baby in. 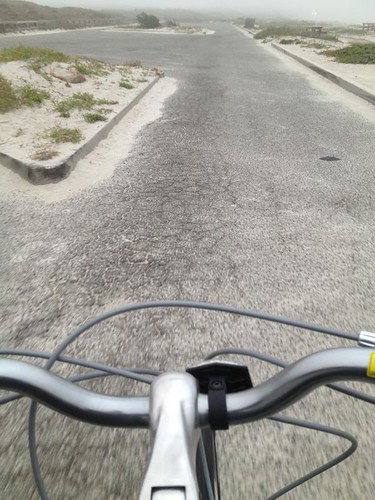 I thought I would have so much free time now that my semester is over, but I spent today running errands and on the phone. I am getting a lot done though. I won’t be riding bike this evening, but the rest of the week I will be able to! I am now on a prepare to move (again), figure out what to put in storage, sew, sew, sew mission.

My emotions seem to sway back and forth depending on what I am working on or scheduling. We have arrived in California! I am glad the stress of the move is over, miss my Mom, and can’t wait until my kids make friends.

We took a few days to drive down from Washington, stopping early enough to have a nice dinner and swim at the hotels we stayed at each night. We also stopped at a couple of quilt shops – one really great one when we were visiting Chris’ adopted parents in the Bay Area!

The first week of being here was the normal getting things set up – arranging for our moving truck to be unloaded, getting the gas and electric turned on, getting the internet turned on, finding the library, unpacking a little. Ever since, we’ve been slowly unpacking and getting set up. We all have library cards but haven’t joined the Y. One kid is registered for school but the other has to wait until next month. JW doesn’t have a preschool but he may not because the cost of daycare/preschools down here, wow. I’m working on getting used to the cost of living, but I’m not sure that will ever happen!

We went to Legoland for the 4th of July. I am fairly certain that this year was the first year in my entire life that I didn’t have fireworks to blow up. I really missed it. Funny how you miss things like that when you don’t have them. As you can see, I don’t know how to use my (new! yay!) iphone camera to take pictures of fireworks.

I have fallen in love with instagram! Are you there? Follow me if you are, my user name there is tsoniki.

A Military Spouse Survey – I haven’t done one of these meme’s in ages, so I figured I’d jump right in. 🙂

One of my best military spouse friends Holly did this the other day, so here are my answers too!
1. How did you and your spouse meet?
We met at the tribal college in my home area. He worked at the library and I worked at the bookstore. It was the semester after he graduated high school, and I’m a year older. It’s only by chance that I stayed home and we met. I was supposed to go to one of the state university’s. I went to orientation, found a job, found an apartment – and when I went to tell the housing office were I would be living, they said I was required to live on campus because I was a few credits shy of whatever (I’m not sure if it was soph or jr). In response I pouted (I’m old enough now to admit this!) and said I wasn’t even going to go. So I stayed home another year and worked and went to the tribal college. There was no way I would have met Chris otherwise.
2. How old were you when you two met?
I was 19.
3. How long have you been together?
Counting from when we started our long distance phone relationship, in June it will be 13 years.

Us before Sub Ball (I like to call these ball “prom for the military”), probably 2004?

4. Where are you and your spouse originally from?
I’m from south central South Dakota, he grew up all over northern California, but I say he’s from south of San Francisco.
5. How did you feel about him joining the military?

He was already in when we got together.

6. Where did your spouse go to ( in the Navy it’s Boot Camp) Basic Training?
Great Lakes, IL

7. Has your spouse ever been deployed?

Yes. For the past three years he’s been gone the majority of each year, before that he did a few deployments on a submarine, we had a stretch of shore duty in between subs and officer stuff.

8. Ever been to his promotion ceremony?

I went to OCS Graduation.

9. How long have you been a military wife?
Almost 12 years.

10. Did you marry him before or after he joined?
After
11. How did your husband propose?

We were at my Mom’s house and had talked about getting married over the past couple of months before. There was no romantic gesture, no rose petals spelling anything out, he said “so do you want to?” while my oldest nephew (a baby at the time) laid in between us sleeping while we were watching tv. LOL

12. Where did you get married?

Rapid City, South Dakota – after the championship game of the Lakota Nation Invitational! It’s a great story. And I never knew that my Grandparents eloped until I did.

13. How old were you two when you got married?
I was 22 and he was 21.
14. Did he wear his uniform on your wedding day?
No. He didn’t even wear a tux! That’s what happens when you get married at 12:30AM in the middle of a living room, in front of a Christmas tree. (See, told you it was a great story.)
15. Where are you and your spouse currently stationed?
He’s stationed in San Diego, but the kids and I live in Washington. We live next door to my Mom and will move this summer.
16. Do you live on base?
No, we live a couple of hours from a base actually.

17. How long were you married when you had to go through your first separation?
It was about a year until his first deployment. But we were kind of surprised to learn about duty days (staying overnight on the ship every few days) (or maybe I was the one to be surprised about that).
18. What is your favorite base so far?
Um, probably Bangor, WA. We lived on base for a year of the five that we were stationed in Washington. I liked the Air Force commissary in Charleston, SC though. And I did love Charleston’s downtown, but that’s not really a base.
19. Do you think your spouse looks good in his uniform?
Yes
20. Do you think military life is more advanced than civilian life?
Advanced? I don’t think it is advanced, it is just a lot different.
21. Do you like the benefits you receive as a military dependent?
I do like them and appreciate that like any benefit, there are ups and downs. I also realize that there are things out there that I don’t use – both because I don’t know they exist and because I don’t need them.
22. Do you have a lot of military wife friends?
I don’t think I have “a lot.” I have a solid handful who I consider very close friends, those I would tell my secrets to. I also have another couple of handfuls of people who I know are there for me when I need them. I don’t need (or want) a lot of friends that I can’t keep track of, I want a few really great ones.
23. What is the hardest part of the military life?
I grew up literally next door to family members, so not being able to raise my kids around more family is very hard. We try to visit at least once a  year, but it just isn’t the same.
24. Do you own military wife stuff?
No.
25. Do you support your spouse as a member of the military?
Of course!

I’m snagging Holly’s tag ~If you are a military spouse, tag – you are it!

Ha, just noticed it looks like JW is smoking something blue in this picture. It’s a whistle that was in his basket.

The boys got new suits for a wedding this summer and they wanted to wear them to church yesterday. Too bad we didn’t get a picture with what JW was really using for his Easter basket – a pumpkin from Halloween. He insisted on transferring everything he got into the pumpkin, even a few swiped candies from his brother and sister.

I hope your celebration was wonderful. Chris emailed and said he didn’t get any eggs, but he did eat duck, so he figured that counted for something.

I love making birthday cakes. I love figuring out how to implement what my kids want their cake to be. JW turned one in January and I made two cakes for his party.

The first was a drum cake. This was a simple two layer round cake with buttercream frosting. I looked up which colors would help me make brown icing and amazingly enough, I got the color I wanted on the first try. JW loves drums and singing. He caught on to drumming the moment he picked up a drumstick.

The second cake was a two layer square cake, also with buttercream frosting. The design was a starquilt star.

The cakes were absolutely delicious! The buttercream frosting was so good.

I am in the beginning stages of planning birthday parties for Alice and Jake now. We are probably moving this summer so they will have their birthday’s in June with friends. We have preliminary guest lists made up and I picked out a theme for each of them – which I’m sure they’ll love but we’ll see once I talk to them about it.