You are here: Home / Archives for Family

In one week and five days JW will be one! (Doesn’t that sound sooner then less then two weeks?) I’m amazed at how fast the year went. I took a picture of him sleeping on my Mom’s lap at around midnight on New Years Eve. A year ago he was huge inside of me and this year he’s a big baby.

I’m working on planning his first birthday party. Of course this one is all for me, and his brother and sister, and my Mom and stepdad too. JW is just too little to realize what is going on. But plan away I shall!

Last summer my friend’s first birthday was Duke themed. The baby’s Grandma made him a round cake decorating like a blue and white Duke basketball, and he had blue and white cupcakes. A few of the gifts from his parents and family were also related to the team.

Since my family is from South Dakota, I thought I could pick the University of South Dakota for JW’s theme (plus that’s where my Mom attended). I mean, he doesn’t even know right. He will just be like “wow you are really letting me eat this sweet stuff? All of it? And I get to make a mess??!” He won’t care what the cake looks like before.

Or what about a soccer cake! He loves going to the older kids’ games. This one looks easy. 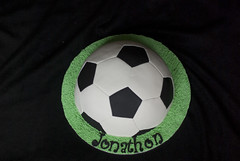 But I haven’t decided. I did find what looks like an easy recipe for rolled fondant and I think I’d like to try that. It would just be easy decor. Maybe the rolled fondant in a color and then I write with icing on top.

I don’t do themes so I’m stumped!

Jake wanted to be Luigi for Halloween this year and after a quick search I found this post showing how to make Mario hats. The only difference between Mario and Luigi hats are the color so this was easy to make.

I did make a mistake at first – the tutorial says to cut 2 – 12 inch circles, I cut 2 – 10 inch circles. After re-cutting and working on Jake’s hat, I realized I could use the smaller circles for a hat for JW! His costume was quickly changed from a star to a Baby Luigi.

We went trick or treating in Fairhaven. The shops there are fun and one of the best bookstores I’ve ever been to is also there, Village Books. We trick or treated there, ran to the store for a few last minute things, and went home to make chili (a yearly tradition for me) and take the kids out in the neighborhood. They ended up going out with my Mom’s husband while she, JW, and I stayed home.

I loved the boys being Luigi, there were a few other Luigi’s in the crowd but I was proud that ours were two of four that were homemade.

My friend Andrea is hosting this week’s Friend Makin’ Monday. I’m glad she is because I’ve wanted to participate for ages now!

What are your holiday traditions?

Since I’ve had kids, I love making their costumes. The first year Alice went as a caterpillar. And by “went” I mean I made her costume and took pictures of her. We lived in an apartment complex and didn’t even take her anywhere. A couple of years ago they were a boiled egg and she was a black fairy. Last year it was Fancy Nancy and a mouse.

I can’t wait for Halloween this year because their costumes are so cute!

I also love seeing other costumes and admit I get disappointed when I see so many people picking the wear the plastic costumes you can buy. I know not everyone feels like they can make a costume, but I wish a little more effort was put into it. I love passing candy out so I can see kids dressed up. I think back to being a kid and while I liked going out trick or treating, once I got a little older I liked seeing the costumes more then anything.

I lived in the same town (or one town away) from most of my family growing up, and so we always spent Thanksgiving eating. All day long. We would start out at Grandma’s house, but not officially, just having a snack or a few bites. She always ate earlier then we did at our own house. Then we would eat at home. After lounging around, we would go to my Uncle and Aunt’s house and either eat again or at least have a snack of some sort.

Since being married I try to invite people over for Thanksgiving. It always made it easier to be away from my family if we had friends over as well. When we lived in SC we had 20+ people! It was awesome. Now that we are closer to my Mom, we spend Thanksgiving with her.

Since I grew up in a very rural area, we never went Black Friday shopping. I never even knew something like that existed until several years ago! The day after Thanksgiving in our house was always the day to put up the Christmas tree and decorate. Even after I discovered shopping on that Friday, I still set it to be a decorate the house day. It’s always worked out fine because I get up and shop super early, then take a nap, and the decorating gets done in the afternoon.

As a child we usually went to midnight mass and after church we were allowed to open one gift. I loved midnight mass, it helped that we lived literally two houses away from church. It was great going to a packed church, with tons of snow on the ground, and just being able to run up the street minutes before it started and being able to just run home afterward.

I started the tradition of opening two small gifts on Christmas Eve with my kids, and one is always new pajamas. I wonder what it is about Christmas that makes people buy or give new pjs? Why not at Easter or Halloween? Maybe I’ll start that as a new tradition!

For the past few years I’ve made breakfast the night before and had it ready to put in the oven, so it bakes while we open gifts. I love this because of course you are hungry but if you have kids, you know they are anxious to see what Santa brought them and they don’t want to wait for you to cook.

Another thing I’ve bought to my kids from when I was younger was opening the stockings later. As in we do gifts, we have breakfast, we look at what we got, we hang out, etc. – then we open the stockings. They are always fun little things, like candy, lip glosses, lotions, and the like. Last year I put spatulas in my Mom’s stocking because she needed new ones.

I already made an appointment to get the kids pictures taken – JW hasn’t had a professional photograph yet, and at (almost) eight months Alice and Jake both already had two sets! That’s what happens when you are born in August, you get the holiday pics in.

JCPenney has an offer from the beginning of September through the month of October for deployed service members. You will get:

I also made contact with a local photographer through Operation Love ReUnited. I knew this existed, but didn’t think about it until last week. It would have been nice to have pre-deployed photos as well as during and/or after. The website says to bring uniform items, and I’m not sure what (if anything!) we have at the house! Chris took everything with him, but maybe there is a hat in storage. I wonder if it has the right rank on it?

She already contacted me and we are working out the details to do a photo shoot while he is gone, then she will also be there for homecoming. What a fantastic service, check to see if there is a photographer in your area.

Over the weekend my kids played in their first soccer games of the season! Alice moved up to playing with seven people on the team, Jake up to five. I’ve been entertaining JW and reading during practice, so I wonder if they are starting to teach Jake’s age group positions yet? He did mention they now have defenders, so maybe they are.

Alice is such a powerful defender – she can go at a ball and kick it about halfway back across the field. I was a few minutes late to her first game because the kids games overlapped. But I was walking by right when she was playing left defender and she ran up and kicked the ball back to the halfway point of the field!